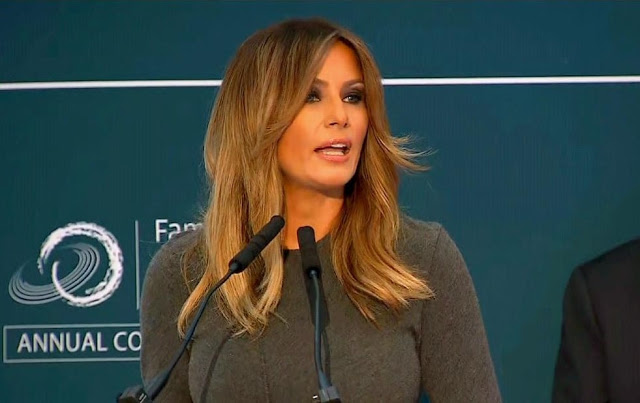 First lady Melania Trump faced booing from middle and high school students as she took the stage at a youth summit on Tuesday.

The conference which was about opioid awareness in Baltimore saw the first lady feeling humiliated on stage.

It didn’t just stop there – the booing continued even as the First Lady walked off the stage.

There were some cheers from the crowd as well as loud jeers as the first lady was introduced at the University of Maryland Baltimore County.

But the audience remained noisy throughout the five-minute speech, and at times she struggled to be heard over the crowd.

“I am in this fight with you and I am fighting for you. I encourage you, if you are struggling with addiction right now, reach out for support — whether it’s a teacher, parent, friend, grandparent, coach or pastor, talk to an adult in your life that you trust,” Mrs. Trump said as she addressed the thousands of students.

“It is never too late to ask for help.”

To this, the students responded with loud boos.

In response to the students’ booing, the first lady issued a statement later saying: “We live in a democracy and everyone is entitled to their opinion, but the fact is we have a serious crisis in our country and I remain committed to educating children on the dangers and deadly consequences of drug abuse.”

The summit, hosted by the Mark Wahlberg Youth Foundation and the federal Drug Enforcement Administration, focused on educating young students on the dangers of opioids and how to handle addiction.

“I know each one of you has hopes and dreams for the future, whether it is college, joining the military, or playing a sport, your future will be determined by the choices you make,” Mrs. Trump said.

“Using drugs will only slow you down and prevent you from achieving those goals.”

Analyzing the reason for the students’ hostile treatment to the First Lady, people pointed fingers to President Trump’s previous comments about Baltimore.

President Donald Trump has been famously critical of Baltimore in the past.

In July he called it a “disgusting, rat and rodent infested” city where no human would want to live. He has also called the city “very poor, very dangerous and very badly run.”